I woke up exactly 2 minutes before my alarm went off.  I was wide awake instantly.  I slipped on some PJ pants and headed downstairs to make 2 slices of PB&J toast and a mug of hot coffee.  After slowly eating the toast and sipping the coffee (and lamenting about the fact I was up before the weekend morning news was on!) , got dressed – I had pre-loaded my skirt pockets with gels, chomps, and gum – which made it interesting to get on!  And then, I waited for Kerrie & Zoe to get here.  They arrived RIGHT on schedule, and soon enough we were out the door. 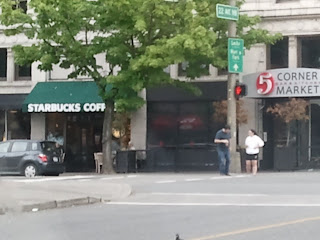 Starbucks.  My love.   My sweet sweet caffeinated love.  Mandatory stop, with a surprise bathroom stop during.  HUZZAH.  We’re only 2 miles from the start line, so we pulled in, pulled up to near the start/finish, and with a last big hug from Mike I was on my own.  (With Kerrie and Zoe, of course.) 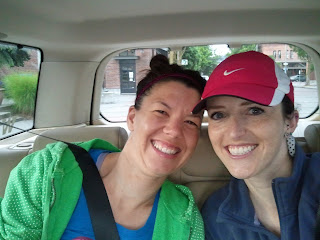 I had just my tank and skirt/shorts on waiting for the start.  Zoe said she just toughs it out, and I’m a hot body anyways, so  I wasn’t too chilly….just anxious.  And nervous.  My longest run in the last two months has been 8 miles.  When I ran that 13.1, it was pre-injury.  So.  Uh.  Uncharted post-injury territory here, folks.

Diana came over to say hi, then Mel, Jayne and Dave showed up to take pictures and say hello.  I think the first thing Mel said to me was ‘Good mornin’ sunshine, you look like you’re going to puke!’  It made me smile.  And not think about puling for a few seconds.  We wandered over near the start line after pictures, and then the jazzercise started.  I had to laugh – watching all these people do crazy stretches while I was nearly shaking was ridiculous. 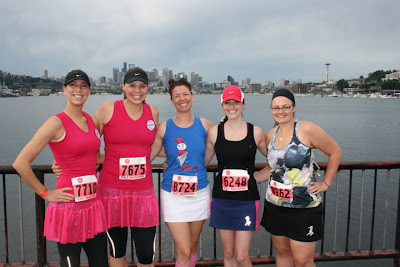 A few bloggers came over and introduced themselves – I talked with Jen for a moment – but at this point my heart was beating in my neck and I was getting even more anxious.  The start/finish wasn’t clearly marked out, and I felt we were too close to the front.  I freaked, slightly, and drug everyone out to an empty spot further back from the start/finish.  Few deep breaths later….and we were off.

It was the first year of this race in Seattle – and given the course map – I knew it was going to be CROWDED.   Little did I know we would basically be jogging in place the first mile!  People started jumping out into the road to run, and dragged Kerrie out with me as we ran across the Fremont bridge.  I think I said something like ‘I drive across this damn thing everyday, so I am going to run over it!!

It was fun when we could actually run.  It was hell when we were packed in like sardines and when the leaders were coming back at us on a narrow path.

Out and Backs – especially long ones – can bite me.  The first water stop did not have water ready – so I had to wait for about 30 seconds to get a cup.   We held the 5:1 walk/run through these miles.  I planned on seeing Mike at mile 3, but SURPRISE he was early on in the first out and back, which means I got to see him twice.   Giving him a kiss at mile 3 got me EXCITED about the rest of the race.

Miles 4-7
Miles 4, 5, and 6 are by my office and my lunchtime run route.  There’s lots of yachts and houseboats to look at, and I knew Mike would be at mile 6. 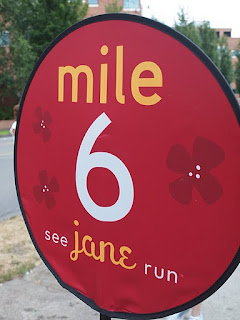 I ate chomps at mile 4.  Now, I burp when I run.  Always.  ESPECIALLY after eating/drinking.  At one point I made Kerrie walk because I had to burp SO BAD.  Finally, I burped SUPER loud.  Kerrie was taken aback and busted out laughing.  A++ Go me.

Around this time Kerrie noticed I wasn’t breathing very well.  As in, forgetting to.  FAIL. For the rest of the race we did calm, deep breaths during walk breaks and during the rough part later on (spoiler alert!)  My ankle was sore and stiff, but loosening up.

We ran past the race photog at mile 5 or so, and I gave him my best big-smile and funny wave.  (I totally ‘adjusted’ everything while running behind some trees before coming up on him.  Hahaha!) 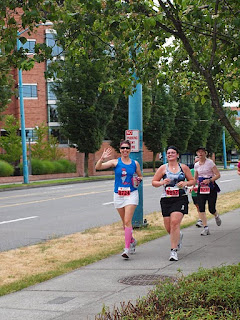 Water stops were crowded, each porta potty had 5-10 people in line.  LAME.  We were still holding the 5:1, but it was getting tougher.  I started grunting and keeping my eyes on the women in front of me.    I knew this would be the tough part – the halfway mark.

Miles 7 & 8 blur together for me.  I wasn’t familiar with the area, and was mentally defeated by some HUGE hills up and HUGE hills down.  Like so steep downhill you couldn’t even run.  At all.  NO fair.   I asked Kerrie – after hearing we still had 3 minutes until we could walk – if we could switch to 2:30/:30 intervals.  I knew my body would run 5 minutes...but my mind wouldn't let me.

Kerrie, I have to say, got me through this rough patch like no one else could.  Kept the talking up, but made sure to ask questions that didn’t involve big answers from me (see breathing issue above).    More chomps at mile 8.   I barely choked them down – I think I even dropped one into a storm drain.  My stomach was NOT being happy.

And then, the thirst.  So thirsty.  Told Kerrie about 100 times how thirsty I was.  She had her handheld w/ Nuun, but I didn’t want to suck down all of her water.  So parched.  So so so thirsty.

Mile 9-10.5
Pretty much the only thing that kept me going right at mile 9 was the thought of seeing Mike and getting my handheld w/ Nuun from him.  We were walking when Kerrie spotted him, and I yelled ‘MICHAEL.  WATER’  from a block away.  Kerrie looked at me, like ‘You still have your voice?  That was loud’.  LOL. 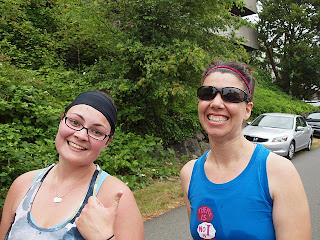 My shoulders were aching. I couldn’t hold them up & open very well, which meant my breathing was getting worse.   Kerrie kept reminding me ‘Pretend your head is tied to a string!’, which helped.  I was having trouble focusing on things other than the pain.

My legs were pretty ‘numb’ at this point, but my big toe & next toe on my left foot were actually completely numb.  They felt like two little rolls of coins in my shoe.  CREEPY!

Mile 9/10 takes you past the race start/finish, where the 2-hour finishers were starting to trickle in.  Knowing I had 4 miles to go was PAINFUL.  I knew how long this out & back was – we basically were running to my Fred Meyer in my neighborhood.  F. M. L.