It feels like everyone is doing a triathalon this summer!  It's a natural progression, I think - most of the bloggers I read and friends I have took up running not because it was their one true love, but because it was something different - a new challenge.  Now, they've conquered their big running 'bucket list' and want a bit of variety in their lives.  Instead of reading about a fun tempo run, we're now treated to stories of bricks and multiple Gu's and even wardrobe changes.  How Fancy!

Friday night I decided to jump on the brick bandwagon.

There was an impromptu brick though.

back for pretty cheap.  I usually use it in my living room while watching Real Housewives (and yelling at Slade, that scumbag!).  I always wrap up by the time Mike gets home, so I've never had anyone in the house while using it.

Friday night though, I set up the trainer, climbed aboard...and Mike freaked out.  Apparently the trainer, even when on the area rug, vibrates the entire house - and probably our neighbor's house too.  (We have a shared wall)

I headed out behind our garage with the bike and trainer, where the house overhangs and provides a few feet of dry pavement.  It was a big chilly out, but felt good (and way better than the 65 degrees it was in the house).  Eventually, I'll get set up in the garage, but with wedding stuff + mower + BBQ...it's a bit snug in there right now.

Anyways.  30 minutes on the bike in 3rd highest gear.  Last 3 minutes going balls-out sprinting.  I jumped off, slightly wobbly-legged and gulped down some water.  I realized that I wanted to do some planks and pushups...but my gross yoga mat was in the car.  Two blocks away.  It was pouring rain.


Sprinted to the car on jelly legs, grabbed mat, sprinted back.  My first brick!  A whole quarter mile.  I know, I know, I pushed through the pain and dug deep and even had a mantra written on my left hand.


Had it kept raining, I probably would have been able to swim in my street, too.  Yoga mat down in the driveway (again with the overhang) and:

Now, I can't post pictures here, because I know Mike sometimes pokes around.  :P  The dress is probably the 7th dress I tried on (4 at the bridal show, 3 before this one at the bridal shop).  It was during my first visit to a bridal shop - a shop I hadn't even known it had existed until my sister went by it on a run and called me, breathless, demanding we go in there.

When you watch shows like Say Yes to the Dress, the brides have this OMG YES THIS IS THE DRESS moment with crying and hysterics and all of that.  I didn't honestly expect to have that reaction at all.  I was just hoping to find something that made my feel like a woman.  Yeah, a woman, with curves and b00bs and something beautiful.

So anyways.  Tried on this dress.  Whoa, yes please.  I couldn't buy it though.  I wanted to try on more dresses!  MORE!  MORE!   I've been waiting since I was a little girl to try on pretty white dresses!  So off I went.  I scheduled appointments at a wide variety of salons in the Seattle area.  Some were fancier than others - while others were full-scale conveyor belts of future brides.


My aunt accompanied me on most of the appointments - but hadn't seen The Dress.  I kept comparing every dress to that one, so after a particularly disappointing trip to Nordstrom, I caved.  I made an appointment at the original salon, told my aunt and future MIL to come, and tried on the dress.

I KNOW!  So silly.  But I did.  My aunt was crying, Mike's mom was crying, my mom & stepdad (while in the middle of Costco in Juneau) were crying.

Needless to say, I bought the dress.  It will be here at the end of June.  I keep looking at pictures of it and sighing happily at my computer.

I'm competitive.  If I'm running next to you, I'm not going to stop until you do.  (Unless I am ready to hurl).  At bootcamp, if the person next to me is doing crunches or leglifts faster, I'm going to match them.

Not always.  I can, at time, get swept up in being competitive in life.  I see on Facebook someone from HS is going to run a marathon.

Why do these thoughts cycle through my head? Why can't I be happy for the couple who just bought their house with a to-die-for back yard or the person who quit her job and moved to NYC?  I am happy for them, damnit, why is my first instinct to be jealous?

I've tried so hard the last few years to be genuinely happy for others.  To let things flow, to be happy with my space in this world and what I do in it.  I try to use bootcamp for healthy competition to push me, instead of trying to beat the other person.


The reason this is all coming up is there's a speedwork class of sorts starting up week after next with Coach Beth & Coach Pamela.  They stressed last night that it's non-competitive.  That you have to leave your competitiveness at the door.  I wanted to do the class, but the first thing that popped into my head is the fact that it would be so hard to drop the competition.  Leave it at home.  (Or in the car)

Do you have mental blocks that you try to work on or improve?  Or any guilty admissions you'd like to leave in the comments?
Posted by Chelsea at 2:25 PM 1 comment:

No one told me that planning a wedding was an all-consuming activity.  Sure, you'll be busy, they said.  But zomg.  I had no idea it was going to be like this.

This weekend, I had high hopes of getting up, working out, grocery shopping, doing laundry.  My veggie drawer started leaking, which is a great indicator of the last time I went grocery shopping.

I got a single load of laundry done.

There were a bunch of wedding related activities - open house at our venue, catering tasting w/ our preferred caterer, family visit to the hotel where most will be staying...and it all just added up.  I don't want to complain (I'm marrying my best friend and that's an amazing thing to have!) but we just need a little break.

This week, outside of the DJ interview Thursday night, is wedding-free.  I won't promise to not surf Style Me Pretty or Pinterest...but we need some time off.  It's the last week of bootcamp and I want to focus on kicking some BUTT through Wednesday.  I have a standing gym appt with a good friend on Thursday.  Friday I'll take the day off work & do a Target run and buy ALL THE THINGS and then have a nap.

How was your weekend?  Tell me about your sweaty activities.  Or your indulgences.  DISTRACT ME, PLEASE.

I've decided to blog a bit about The Wedding (tm) here...hope you all don't mind!

Initially, we wanted to get married in Seattle proper, preferably somewhere on/near the water.  We wanted a space that allowed for inside ceremonies (in case of rain!) and had an easygoing Northwestern-y vibe.  (Exposed wood, nothing too fancy or overdone)

The venues we found in Seattle proper were decent...but overpriced and we found the staff borderline rude.  Apparently the 'best' venues in Seattle book up a year in advance...so when I was looking for a Saturday in September in January...well a few places basically laughed me out of the building/phone/email.

We expanded our search radius to include parts of Puget Sound, including the Hood Canal and San Juan Islands.  We found this gem and scheduled a tour the next weekend.  When we got out of the car that weekend, we knew.  This was it. 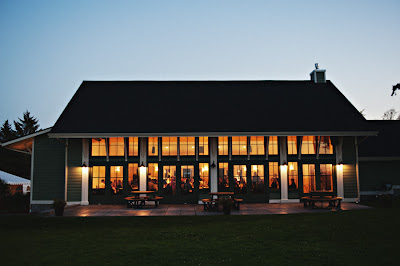 The view from the back patio/lawn

The site is an old fishing/port town that has been rebuilt.  it's now home to cute little shops, a beautiful chapel (St. Paul's) and this Pavilion. 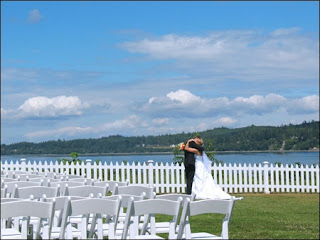 We're not entirely sure of how we will use the space just yet.  We have full use of the pavilion, along with a large tent for ~150 people to the left of the building on a stone patio, plus all of the grass in the back.  The grass is actually bordered with a white picket fence and overlooks Hood Canal.

It's fantastic for what we want - places to get married, drink, eat, and dance.

This weekend we have a tasting with the caterer we hope to use - and the weekend after is the cake tasting. : )

The best part about Port Gamble?  We get to buy and bring our own booze.  Hello signature cocktails and tasty champagne!

Tagged from Tall Mom...I'm really bad at these things....and will not be tagging anyone. LOL.


3. Answer the questions set for you in their post.


4. Create 11 new questions for the people you tag to answer.


5. Go to their blog and tell them you've tagged them.

1.       What is your favorite season for running and why?
Fall/Winter.  I love when it’s chilly and raining and you’re generally feeling awesome & alive.

2.       If you could meet any famous person, who would it be and why?
Ehh?  I’d love to be besties with Reese Witherspoon.

7.       How did you meet your significant other?
The internet.  Not through a dating site or anything – through a Seattle/UW community on Live Journal.

8.       If you could go on vacation anywhere in the world, where would it be and why?
Europe.  So much history

9.       What is your favorite fruit and vegetable?
Apple & Zucchini

So, bootcamp.  I think I talk about bootcamp almost as much as I talk about the wedding.  I freaking LOVE IT.

2 set of 20 second side planks on each side.
1 set of planks with the hip shimmy. 20 on each side.
3 min of cardio.
10 Girl Push Ups.
10 Push Ups with your hands outside of the mat and your fingers outward.
10 Push Ups with your thumbs and index fingers touching, in a triangle.
3 min of cardio.
20 bicycles. Elbow cross your body towards opposite knee.
100's. Up with your shoulders and head and push down your arms 100 times
2 x 25 crunches with your knees in by your chest
3 min of cardio.
10 Suicides. Up in hand plank, and down on your elbows and then back up on your hands.
10 girl push ups.
10 walking push ups. Up on your feet. Walk your hands down to a plank. 3 push ups, and then walk your hands back up to standing, then 3 jumping jacks.

Now, that's just the arms/abs 'homework' in case we miss a class.  On legs days, we run drills across the basketball courts, do 2x court lengths of lunges, do wall sits for minutes at a time... OOF.

I could do this stuff at home (and likely will, after class is over), but it's just so much FUN doing it outside with other women.  Giving in to the squish of the mud between your fingers, panting as you sprint as FAST as you can, the swear words as we all tip over on side planks because our exhausted bodies can't hold us up anymore.