It feels like everyone is doing a triathalon this summer!  It's a natural progression, I think - most of the bloggers I read and friends I have took up running not because it was their one true love, but because it was something different - a new challenge.  Now, they've conquered their big running 'bucket list' and want a bit of variety in their lives.  Instead of reading about a fun tempo run, we're now treated to stories of bricks and multiple Gu's and even wardrobe changes.  How Fancy!

Friday night I decided to jump on the brick bandwagon.

There was an impromptu brick though.

back for pretty cheap.  I usually use it in my living room while watching Real Housewives (and yelling at Slade, that scumbag!).  I always wrap up by the time Mike gets home, so I've never had anyone in the house while using it.

Friday night though, I set up the trainer, climbed aboard...and Mike freaked out.  Apparently the trainer, even when on the area rug, vibrates the entire house - and probably our neighbor's house too.  (We have a shared wall) 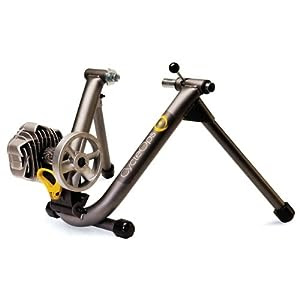 I headed out behind our garage with the bike and trainer, where the house overhangs and provides a few feet of dry pavement.  It was a big chilly out, but felt good (and way better than the 65 degrees it was in the house).  Eventually, I'll get set up in the garage, but with wedding stuff + mower + BBQ...it's a bit snug in there right now.

Anyways.  30 minutes on the bike in 3rd highest gear.  Last 3 minutes going balls-out sprinting.  I jumped off, slightly wobbly-legged and gulped down some water.  I realized that I wanted to do some planks and pushups...but my gross yoga mat was in the car.  Two blocks away.  It was pouring rain.


Sprinted to the car on jelly legs, grabbed mat, sprinted back.  My first brick!  A whole quarter mile.  I know, I know, I pushed through the pain and dug deep and even had a mantra written on my left hand.


Had it kept raining, I probably would have been able to swim in my street, too.  Yoga mat down in the driveway (again with the overhang) and:

Not bad for a Friday night!
Posted by Chelsea at 2:41 PM